IF YOU SEE THIS MAN, DO NOT APPREHEND, CONTACT THE POLICE IMMEDIATELY.

London Metropolitan police commissioner Stanley has had some disturbed nights since the first appearance of Spring Heeled Jack. The London newspapers have called for the immediate arrest of this public nuisance. Last seen in the Westminster area of London he seems to have disappeared as mysteriously as he appeared. Some people have likened him to a demon, while others described him simply as a mischievous miscreant, all however have called for his arrest.

The London gazette has offered it own reward in conjunction with Viscount Canning, the police are concerned that this could cause a host of vigilantes to roam the streets of London in search of this “demon.”

This is our first comic.

It tells the story of how Jack Watford gentleman and former Royal Navy Captain, became the legend Spring Heeled Jack. After meeting his friends one evening for a game of cards he accepts a wage that will change his life forever.

Using his specialist training and some inventions from some old friends Jack easily wins the wage but leave some very distraught people in his wake!

A night of fun for one but not for others!

This comic sets the scene for more to come, or will Jack get caught?

Based in Southampton section 42 is a secret department of the Royal Navy.Creators of weaponry and gadgets, and all things scientific they and are funded directly by the government. Since the advent of steam power section 42 has outgrown it home and moved to new premisses. The envy

With the spectacular success of the gadgets they created for Jack, they have now adopted a new badge for their section.

Jack Wiltshire had served on board various naval ships, including the dragon and the valiant, although his actual duties on board were never recorded. Having served in both the Indies and Americas Jack retired early from his naval duties after his parents died in and unfortunate accident. Inheriting a London Town house and a small estate in Hampshire, along with rather a large sum of money jack came home to take stock of his life and to retire.

Helena Darabeaux was born on the small island of St. Helena in the South Atlantic Ocean. Her father was in the diplomatic service, where she become fluent in French, German and Italian. She spends her time at elegant embassy parties, where she mingles with the cream of society.

Where you can see us 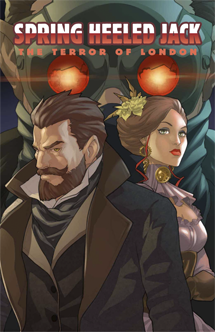 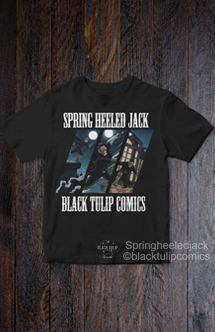 T-shirts are available in black or white 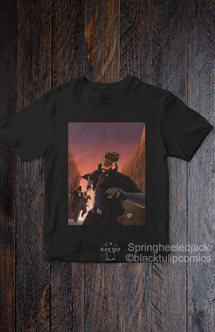 T-shirts are available in black or white

Welcome to Black Tulip Comics. If you like good stories with plenty of action and great artwork, you have come to the right place. Our first comic Spring Heeled Jack, tells the story of Jack Wiltshire a retired naval officer, who accepts a wager which changes his life. Action and adventure awaits.

I spent my childhood like most other children reading superhero comics, among my favourites were Thor and X men. Now, this is my chance to tell the stories. Black Tulip comics and Spring Heeled Jack is my first step on this journey, I trust that you will take this journey with me and meet some amazing people along the way!